Another year and another adventure. AoC doesn’t disappoint. It somehow was better for me this year, even though I’ve got lower score. It’ll sound as an excuse, and maybe it is, but I’ve started new job in December. So, I couldn’t spent whole day dealing with the problems, as I had to focus on my new role. And this was actually a good thing. Yes, I’ve gained less stars. But, I wasn’t spending a lot of time poking around, and basically running circles. Instead, I’ve tried few things and then had to do other stuff, so it’s given me time to refresh my mind and start clear. The overall score is lower, but I’ve spent probably 4-5x less time on these riddles than last year. Well, maybe I’ve got a little bit better as well;)

I’ve actually thought that I won’t have any time at all for AoC this year, so I’ve started to solve problems on leetcode. It’s really good exercise. Their unit tests are great, mine usually suck. I recommend it to everybody. I don’t see much point in paying them, but they’re definitely worth a try. I’ve even managed to solve few problems classified as hard. This preparation helped me a lot. Many problems I was able to solve within minutes instead of hours. It’s given me a proper mindset. I’ll probably keep solving problems whenever I’ll have a moment to spare because I’m learning a lot. If you think you have good understanding of data structures, go solve some problems on leetcode, and verify it.

Back to AoC. Problems were interesting. Maybe a bit easier than last year, but again, I also can be a bit better. And some problems were similar to the previous ones. Many problems I’ve not solved were due to the amount of work I would’ve had to put in them rather than me not knowing how to solve them. At least first part, AoC can always kick your ass in the second. As usual I’ve learnt a lot and will probably be able to use some of these things in my work.

There was a problem, I believe, I could’ve solved, but just couldn’t get myself to do it, day 16. Every time I’ve set it up in my mind I just couldn’t get myself to code it. I just hate dealing with hex. Probably that’s the main reason why my interest in computer security ended on reading what other people produced/discovered. Because every time I see hex editor I hear nope in my head.

And there was another one which I could’ve probably solved on paper, but I would’ve struggled to code it, day 8. It was actually pretty interesting, but I would be running circles as crazy trying to solve it with code, I know it. So, it just wasn’t worth the time.

Oh, and I’ve also became AoC supporter. I recommend you to do the same, if you’re into this kind of “fun”. As always I’m sharing my code and the calendar. 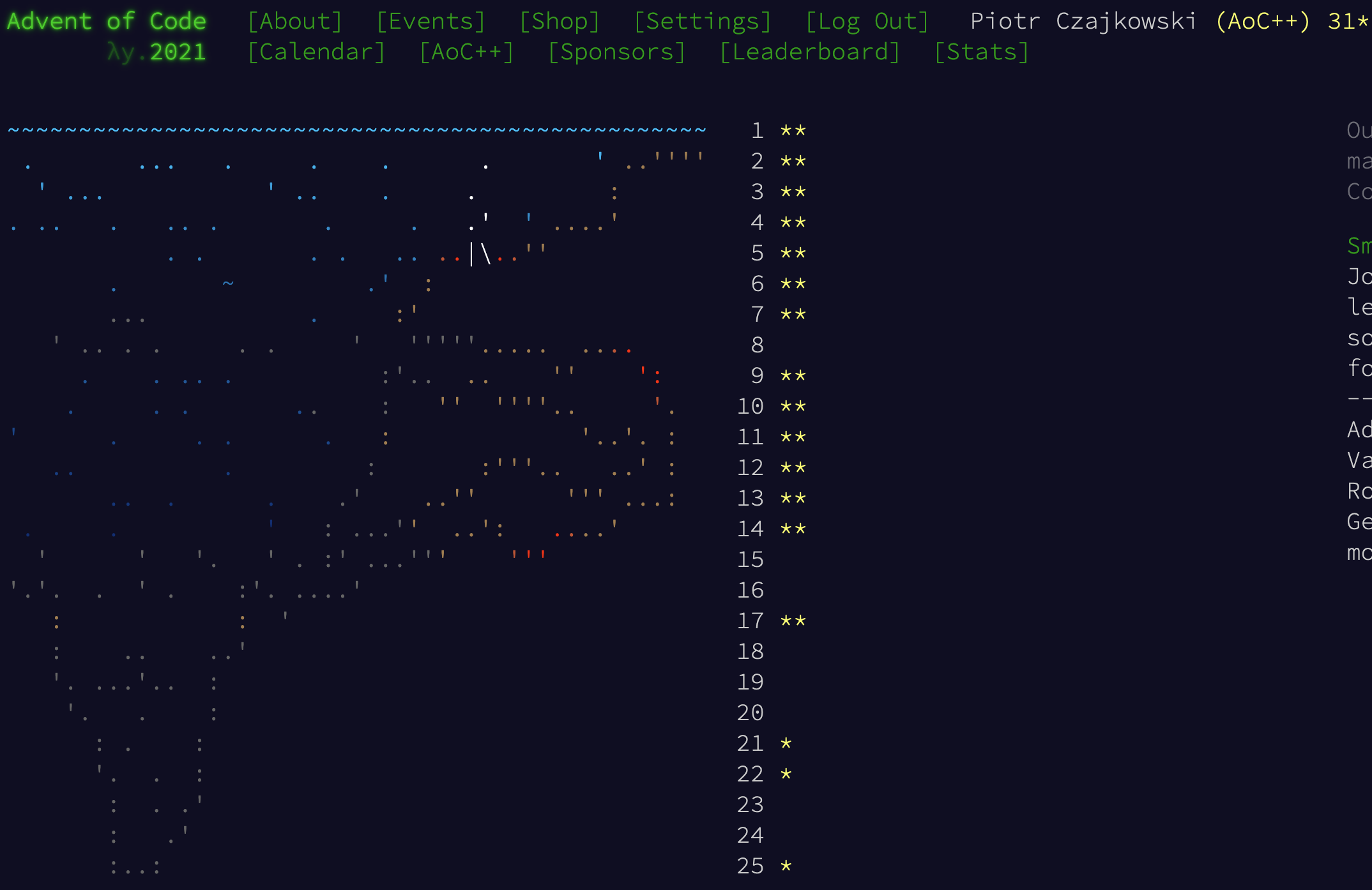