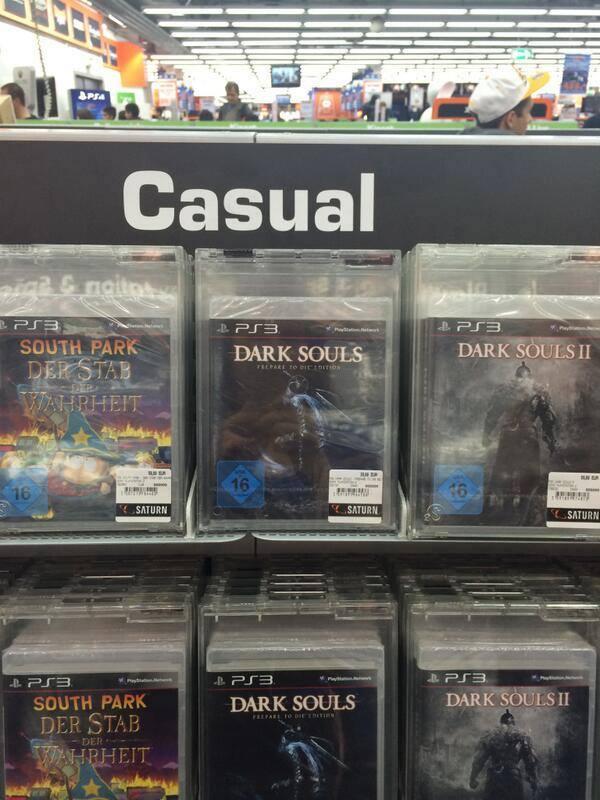 Somebody has shared this image with me as supposedly funny. But I completely agree. I have very little time to play video games. And I practically only play Souls games. Why? Because you can do a lot in 15 minutes. You can approach a boss at least three times, and even defeat him. You can complete entire stage and get all the loot. You can farm.

I’ve bought Red Dead Redemption 2 recently and oh boy. This game isn’t casual at all. It’s loading forever, on my PS5! Cut scenes last for ages and you usually don’t want to skip them as this game is all about cut scenes, as they’re driving the story and set the mood. You can’t save game in the middle of the mission. When you have kids and your wife calls you to do some chores it’s extremely annoying that when you’ll come back you need to do the same quest again just because you had no time to deliver the loot to some guy. And the horse rides. Of course, it’s beautiful and peaceful, and everything. But I have no time for it. Sure, it’s easy, especially comparing to Souls, but that’s another problem. I got bored quickly. So, it sits there waiting for better times. My retirement maybe? And I’m playing Sekiro now.

Souls games are very well made. My first was Bloodborne, I’ve bought it with PS4 because it got good reviews. But I’ve played it once, died immediately and put it aside while playing Last of Us. Which is also great game. But Souls is love. When I’ve finally got to play Bloodborne for real, I was hooked. Spent many hours with it, in 15 minutes chunks of course. And wandering around Yharnam, man, what a delight. It feels so good. Was never bored. And even though I’ve died a lot I still wanted to push forward. It was great fun. I’ve not finished it, yet. I’m stuck at Martyr Logarius. But I’ll definitely get back to it.

That’s the magic of these games. Even though they’re hard you want to push forward. You want to get better. Because it’s rewarding. I’ve bought Doom Eternal some time ago. Played few times and got so tired of these platforming sequences that I’m not sure I’ll ever get back to it. Previous Doom was a great game, but Eternal is simply not for me.

Next was Dark Souls 3. What a masterpiece. It was real pleasure to play. This time I’ve been playing with walkthrough from the start. And that’s another thing about these games. You can use walkthrough and it doesn’t spoil anything, because in the end you still need to master the skills needed to defeat the enemies. Nobody will kill the bosses for you. Tips from the Internet can help, but it’s up to you to be able to use them. Plus without walkthrough you’ll miss a lot. In this one I’m stuck at Twin Princes, but I’ll defeat them, some day, for sure.

The first, and hopefully not last, Souls game I was able to finish was Demon’s Souls. It may be ridiculous reason, but I’ve bought PS5 just for it. And it was worth it. Game is simply beautiful and it was great fun. But indeed it’s probably the shortest and the easiest one.

I’ve also bought Dark Souls 1 and 2, but they haven’t aged well in my opinion. And I couldn’t get myself to play more than an hour in total. Maybe some day their time will come and I’ll get back to them.

As I’ve already mentioned, now I’m playing Sekiro and it’s wonderful. I’ve bought Nioh before it (because I’m cheap and Sekiro keeps its price), but it was just not it. Sekiro is magical. And although they’ve changed a lot in mechanics, it still feels like Souls game. Man, I don’t know how long it took me to defeat Genichiro (still no time in comparison to Shadow of Yharnam from Bloodborne), but with every try I’ve felt like I’m a little bit closer to killing him. And that’s the thing, bosses are hard, but you constantly feel like it’s simply the matter of more training before you’ll be able to kick their asses. In many games difficulty feels artificial, but not here. Here you feel like fighting with yourself. And I love it!

I’ve also tried Star Wars Jedi: Fallen Order, it was fun, but it just wasn’t it. Platforming sequences felt harder than fighting. And because you could downgrade difficulty at any point I was abusing it as crazy. Souls games need to be demanding. But hey, it’s EA, they simply want the game to be accessible to as many people as possible, because money.

I know, this post is infantile, and maybe video games are too. I know some people who think that. But for me games are fun in general, and Souls games in particular. And this text was boiling inside of me for a long time, ever since I’ve bought Bloodborne, so I had to get it out of me.